Various midstream berths are available for Ship to Ship or Barge operations. Although these berths are within the Port of Rotterdam the advantage is that these operations can be carried out without obligation to berth alongside a terminal. This results in a cost saving operation. Expenses are calculated on the time of the port stay and quantity of cargo to be transferred. Dynamic Port Agencies is your partner to assist with these operations. 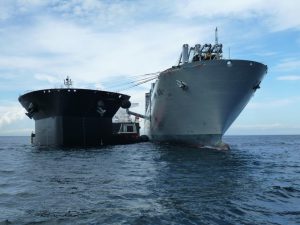 About Ship to Ship operations

A ship-to-ship (STS) transfer operation is the transfer of cargo between seagoing ships positioned alongside each other, either while stationary or underway. Cargoes typically transferred via STS methods include crude oil, liquefied gas (LPG or LNG), bulk cargo, and petroleum products. The nomenclature STS transfer should be used in reference to techniques used by civilian merchant vessels, as differentiated from underway replenishment which is the term used by the US Navy for similar, but usually far more complicated, operations between naval vessels while underway.

Most of cargo operations take place between a ship and a land-based terminal. Nevertheless it sometimes can be useful to transfer cargo from one ship to another in the open sea and this is called a ship to ship operation. One vessel will act as the terminal whilst the other one will moor. The receiving ship is called the daughter vessel and the delivering vessel is called STBL (Ship to be lightered) or Mother vessel.